The Digital Age in the Anthropozoic era

The Digital Age in the Anthropozoic era

Through our TV screens, cinema, magazines and newspapers, in Science, environmental news and photographs from space, or even just walking along the main road of a city or town you know well, there is proof enough that we are - and that humans have and always will be - having a huge and often detrimental effect on the natural world.

In the late 1800s a phrase was born: Anthropocene. Italian geologist Stoppani reportedly coined it in an acknowledgement that humans were increasingly having an influence on the ‘Earth’s systems’. This is called the Anthropozoic era: ‘the current geological age defined by human activity having the greatest impact on the climate and environment.’ What can we define as the greatest impact?

In 2014 The Guardian published an article showing satellite images of a dried up Aral Sea Basin as a side effect of over production of cotton due to demand. In the article, Transy Hoskins blames “The fashion industry” as being “linked to the environmental devastation in the Central Asian inland sea” (https://www.theguardian.com/sustainable-business/sustainable-fashion-blog/2014/oct/01/cotton-production-linked-to-images-of-the-dried-up-aral-sea-basin). But there’s no smoke without fire - consumers as well as producers all need to take a long hard look in the mirror and accept responsibility for the damaging effects fashion greed is having on our world. Much of this I have discussed in a previous blog post (https://www.wellbeingwithrosie.org/2018/10/sustainable-fashion-making-better.html). Fortunately, there are people and movements making a change: opting for up-cycled fashion, second hand fashion and reusing material rather than producing new.

David Attenborough has taken to the stage to hammer home the message about protecting the natural world - ok, rather than hammer he sort of gently serenades us with a soft, sad soliloquy. The serene but serious tone of Attenborough is being relied on. As the token spokesman he has been called in to relay to the general and generally adoring public (who doesn’t love and respect Attenborough?) that humankind is destroying the earth and it’s ecosystems. Wiping out entire ecosystems without even noticing, he once stated matter-of-factly in an interview with Prince William. The most pertinent message was delivered in Blue Planet II, watched by millions; it was credited with highlighting the issue of plastic pollution and pushing it up the political agenda. 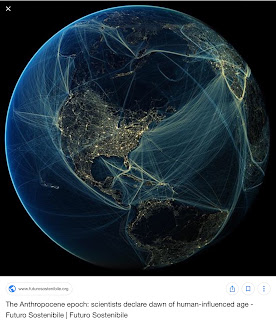 Conversely, critics of Attenborough claim that those documentaries dodge the more fundamental problems, like industrial fishing and overconsumption. One such critic, George Monbiot - a commentator who is also admired and whose work is acclaimed by many - states, “By downplaying our environmental crisis, the presenter’s BBC films have generated complacency, confusion and ignorance.” He even goes so far as accusing “Attenborough’s environmentalism [of having a] coherent theme, it is shifting the blame” (David Attenborough has betrayed the living world he loves, The Guardian online 7 Nov 2018).

Can you blame a person for trying? According to Monbiot (who was, since 1985, working in the department that has made most of Attenborough’s programmes), you can. By shifting the blame.

Attenborough, scientists abundant and activists are all reaching out to the public and politicians to listen and act. They reach out through TV programs, the internet, social media. But how does the digital world and the new digital age play a part in this Anthropocene?

Marshall McLuhan famously cited that all media are now ‘bodily extensions’ due to the increasing use of media as central to human life. Media theory has taken a ‘mediality’: it now exists as the place in the middle of or in between all things. When you consider this in a practical sense, about where and when you rely on media, it’s hard to disprove this theory. The innovation, interaction and immersive world that the digital age has to offer its users promises of a future of development, rapid change and virtual reality. There is an illusion of control, power and progress. But what does this all mean, in Attenborough’s reality?

At the cost of rainforests, poisoning water ways and plastic waste, we can now celebrate Healthcare which has improved dramatically.  As a direct result of digital developments, it promises up to 75% of developed nations having digitalized records and more autonomy over heir health care and access to treatment in the near future. However, according to weforum.org, “Reaching the most disadvantaged and truly transforming their circumstances requires a significant shift in mindset.” In terms of business, technology is seen to be advancing not only corporate purpose, but smart-automation (as well as killing jobs, its creating them and changing the skill sets employers are looking for) and “Global wealth”, which “has increased since the beginning of industrialization in the early 19th century” (pwc.nl).
Consider the use of the internet - the old, beep beep beep routers and modems are gathering dust, relics of a not-to-distant past. You can now access infinite possibilities from the flick of a finger, a tap of a tablet and from the comfort of your phone, which conveniently fits in your pocket. Who’d have imagined that in post-World War 1946? The first computer - catchily named ENIAC and measuring a humble 1800 square feet - is a far cry from the adept, sleek and shiny handsets we have today. For a more comprehensive list of the changes in IT development I recommend you read this: https://www.bbvaopenmind.com/en/articles/internet-changed-everyday-life/

With most people having access to the internet and immeasurable mounds of information, are we able to deal with this information correctly? Are we ready for having the world at our finger tips? And what does it mean for the world?

Proust explored the idea of reading. We are not predetermined, genetically, to read. We are predisposed to have and acquire language. We are genetically programmed to be able to and to want to communicate, orally or otherwise. But to read we have to be taught. Maryanne Wolf, in her book ‘Proust and the Squid: The Story and Science of the Reading Brain’ (2008) offers an idea about how and why the brain works or doesn’t work when we try to learn to read.
In chapter one, she describes her thoughts about the “Google universe” that her children, and increasingly all of humanity’s children, are growing up in: “Will the constructive component at the heart of reading begin to change and potentially atrophy as we shift to computer-presented text, in which massive amounts of information appear instantaneously?” She also wonders whether the old and the new can exist harmoniously side by side, “can we preserve the constructive dimension of reading in our children alongside their growing abilities to perform multiple tasks and to integrate ever expanding amounts of information?”  Interestingly, she poses ideas about why the dyslexic brain may be better suited to a futuristic world of technology - as designers, creative thinkers and visually strong people, they could flourish in a computerized multi-modal world.

So what does the technological future hold for humanity? We can read widely and delve into the ether as much as we want and as far as we like, or dare to go... but the only way we will truly know the answer to this is to live the life we choose and the life that has been chosen for use by our predecessors - the inventors and the surrealists, the artists and scientists, the teachers and students. And if, in the meantime, we can use our technological advancements to reduce the impact of humanity on the climate and environment, I am all for it. Otherwise we’ll need to coin a name for a post-geological world defined by humanity’s destruction of the Earth’s systems.